Beranda » News Report » Interviews For Government Recruitment In 23 States and 8 Union Territories Of The Country Will No Longer Be Conducted.

Interviews for government jobs in 23 of the country's 28 states and eight Union Territories, including the newly formed Jammu and Kashmir and Ladakh, have now been scrapped. Union Minister Jitendra Singh gave this information.
Interviews in Group B and C have already been closed since 2016
According to information provided by the Ministry of Personnel and Training, Singh said that the arrangement for interviews for Group B (Non-Gazetted) and Group C posts in the Central Government has been abolished since 2016. He said that PM Modi had in 2015 talked of removing interviews from exams from Lalkilla and giving jobs on the basis of written exams.
Interview Removal Process Has Been Completed
Singh said that on the advice of PM Modi, the personnel and training department has completed the process of removing the interview system from central government jobs within three months of considering the matter. It has been implemented on January 1, 2016.
Interviews will not be held in 23 states and 8 Union Territories
He said that Gujarat and Maharashtra have accepted the rule very quickly. So the other state showed reluctance to implement this soon. However, now the system of not conducting interviews from the examinations of 23 states and 8 Union Territories has been adopted.
Interview for Group-B (non-gazetted) and Group-C posts in Central government jobs has been abolished in 23 states and eight Union Territories (UTs) so far -- an exercise that started with effect from January 1, 2016.
All the eight UTs of India, including newly created Jammu and Kashmir and Ladakh, are among the regions along with 23 out of the 28 states of the country have so far followed Prime Minister Narendra Modi's call which he made from the rampart of the Red Fort on the occasion of Independence Day on August 15, 2015. 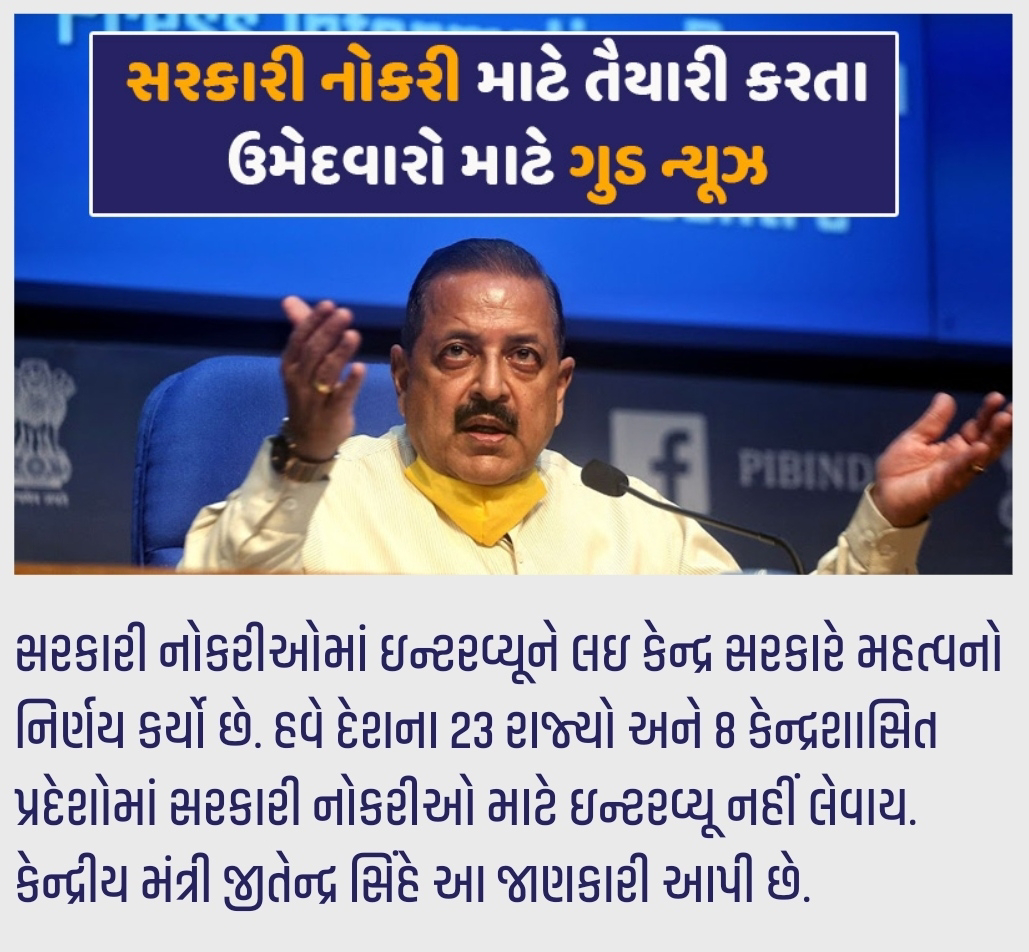 It is among some of the path-breaking reforms brought by the Department of Personnel and Training (DoPT), a statement from the Ministry of Personnel, Public Grievances and Pensions said quoting Union Minister Jitendra Singh.
Singh recalled that Prime Minister Narendra Modi had suggested in 2015 the abolition of interview and making job selection totally on the basis of written test, because "whenever an interview call was received by a candidate, his entire family would get disturbed with apprehension and anxiety".
On a quick follow-up to the Prime Minister's advice, the minister said, the DoPT undertook an expeditious exercise and within three months completed the entire process to announce abolition of interview for recruitment in Central government with effect from January 1, 2016.
However, Singh said that while some states like Maharashtra and Gujarat were quick to implement this rule, there were other states which were quite reluctant to abolish the conduct of interview for Central government jobs.
The job was messed up in interviews
The statement said that the system has proved to be very effective in removing the interview system to bring transparency in the recruitment process for candidates preparing for competitive examinations. There were frequent allegations that interview marks were being manipulated on a large scale for these jobs. And a large amount of cash was paid in return
Important Link
આ ન્યૂઝ રીપોર્ટ ગુજરાતીમાં વાંચવા અહીં ક્લિક કરો.
Tag : News Report

0 Komentar untuk "Interviews For Government Recruitment In 23 States and 8 Union Territories Of The Country Will No Longer Be Conducted. "