The Government of India has decided to implement the Central Sector scheme "SVAMITVA". The scheme aims to provide an integrated property validation solution for rural India. The demarcation of abadi areas (the abadi area includes inhabitant land, inhabited areas contiguous to Abadi and wadis/basties in rural areas ) would be done using Drone Surveying technology, with the collaborative efforts of the Ministry of Panchayati Raj, State Panchayati Raj Department, State Revenue Departments and Survey of India

This would provide the 'record of rights' to village household owners possessing houses in inhabited rural areas in villages which in turn, would enable them to use their property as a financial asset for taking loans and other financial benefits from Banks. Further, this would also enable updation of property and asset register to strengthen tax collection and demand assessment process of Gram Panchayats.

Thus, the legal record of property holders and issuance of 'Property Cards' to household owners based thereon would facilitate monetization of rural residential assets for the purchase of credit and other financial services. This could also pave the way for clear determination of property tax, which would accrue to the GPs directly in States where it is devolved.

Further, these GIS maps and spatial database would also help in preparation of accurate work estimates for various works undertaken by Gram Panchayats and other Departments of State Government. These can also be used to prepare better-quality Gram Panchayat Development Plan (GPDP). 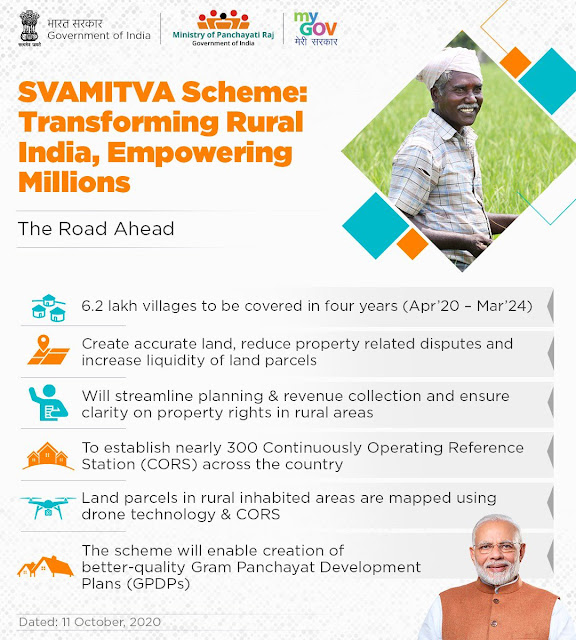 Need for the Scheme

Survey of rural land in India for Settlement and record of rights had last been completed many decades back and moreover, ABADI (inhabited) area of villages were not surveyed/ mapped in many States. Hence, in the absence of a legal document, the owner of the property in the rural areas are not able to leverage their own property as a financial asset acceptable by the banks for the purpose of providing loans and other financial assistance. Therefore, to provide the legal right of the property to the household owner, there is a need of latest Drone Technology and Continuously Operating Reference Station (CORS) technology for capturing images.

High resolution mapping at very large scales for revenue, urban and water resources requirements has been in forefront for the past 3-4 years and Sol has evolved standard operating procedures for acquiring very high-resolution aerial images and preparing very large-scale maps at 1:500/1,000 scale using Drones. 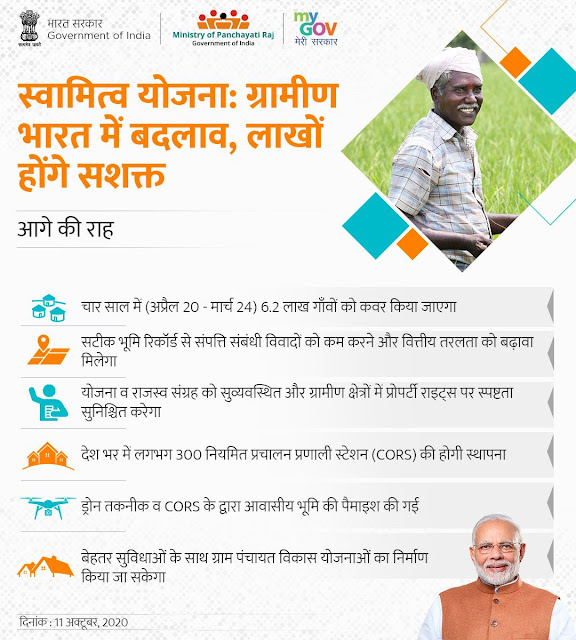 Mapping of the Rural habitations in partnership with various state governments viz Maharashtra, Haryana, Karnataka, Madhya Pradesh etc primarily for use as revenue maps to confer ownership rights has been undertaken by Sol in the past 1-2 years.

Based on these maps or data, property cards have been issued to the citizens viz for Sonari village by govt of Maharashtra and SIRSI village by govt of Haryana. The high resolution and ‘accurate image base maps have facilitated creation of the most durable record of property holdings in these areas with no legacy revenue records.

Objectives of the Scheme

The scheme seeks to achieve the following objectives: -

To bring financial stability to the citizens in rural India by enabling them to use their property as a financial asset for taking loans and other financial benefits. Creation of accurate land records for rural planning. Determination of property tax, which would accrue to the GPs directly in States where it is devolved or else, add to the State exchequer. Creation of survey infrastructure and GIS maps that can be leveraged by any department for their use. To support in preparation of better-quality Gram Panchayat Development Plan (GPDP) by making use of GIS maps. To reduce property related disputes and legal cases

Coverage Of This Scheme

There are about 6.62 lakh villages in the country which will be eventually covered in this scheme. The entire work is likely to be spread over a period of four years. Presently, the pilot phase is being approved for the year 2020-21. Pilot Phase will extend to six pilot States (Haryana, Karnataka, Madhya Pradesh, Maharashtra, Uttar Pradesh and Uttarakhand) covering approx.

1 lakh villages and CORS network establishment is planned for two States (Punjab And Rajasthan). Refer Annexure I for the state wise count of villages covered under pilot phase. The respective State Government would finalise the list of villages at the time of signing Mou with Survey of India

For the States, which have already done Abadi surveys, the scope and the process of the survey will be decided in Phase II (post Pilot Phase), in consultation with the States.