Election Results 2022 Live Updates: The most awaited moment of this year’s biggest assembly elections covering five states – Uttar Pradesh, Punjab, Uttarakhand, Manipur and Goa – has finally arrived as the counting of votes began at 8am. 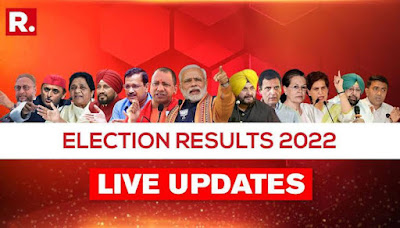 While it could take hours to get a clear picture of the voters’ verdict, the initial trends will start emerging soon after the counting of postal ballots starts.

Most of the exit polls have predicted a clear victory for the incumbent Bharatiya Janata Party in Uttar Pradesh and Manipur, an edge in Uttarakhand, and a close contest in Goa.

The Aam Aadmi Party (AAP) could make a huge leap in Punjab as exit polls have suggested a massive victory, with one pollster predicting up to 111 for Arvind Kejriwal’s party in 117-member assembly.

Congress will be betting against the exit poll results for Punjab, where it is incumbent, and hoping that the neck-to-neck fight in Goa and Uttarakhand, as predicted by the pollsters, turn out in its favour.

BJP regains lead in early trends for UP, Congress ahead of AAP in Punjab

As election officials started counting postal ballots, the BJP made early gains in initial trends in Uttar Pradesh and is leading on 27 seats as against the Samajwadi Party which is ahead on 18 seats. According to reports, the BJP-led alliance started leading on 33 seats within the first 30 minutes of counting.