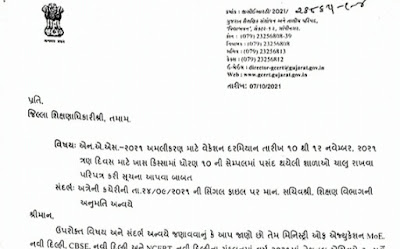 National Achievement Survey (NAS) is a nationally representative large-scale survey of students' learning undertaken by the Ministry of Education, Government of India. NAS gives a system level reflection on effectiveness of school education. Findings help compare the performance across spectrum and across population in order to find the desirable direction for improvements. 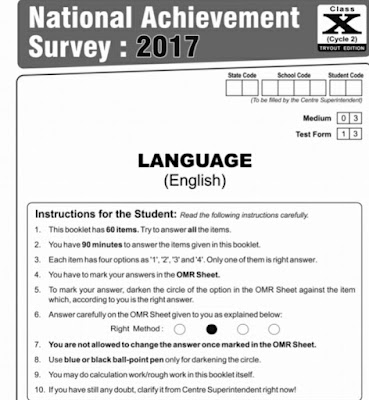 National Achievement Survey-2021 is scheduled on 12th November 2021. The National Council of Educational Research and Training (NCERT) has developed the Assessment Framework for gauging the competencies attained by the students vis-a-vis learning outcomes. The Survey goes beyond the scorecard and includes the background variables to correlate student's performance in different learning outcomes vis-a-vis contextual variables.
This national level survey would be conducted by the Central Board of Secondary Education (CBSE) as Assessment Administrator for Grade 3, 5, 8 and 10 students of State Govt. schools, Govt. Aided schools, Private Unaided recognized schools and Central Government schools.
The Survey will be conducted in a monitored environment in the sampled schools. Sampling Design for NAS 2021 intends to support the predefined and agreed objectives of the national assessment, NAS 2021 intends to provide information of what India's students know and can do in key grades and subjects at national, state, district and school type.
Selection of sampled schools is based on UDISE+2019-20 data. Therefore, the States, Districts used for drawing of the samples for NAS 2021 is exactly as per the UDISE+2019-20.
NAS findings would help diagnose learning gaps of students and determine interventions required in education policies, teaching practices and learning. Through its diagnostic report cards, NAS findings help in capacity building for teachers, officials involved in the delivery of education. NAS 2021 would be a rich repository of evidences and data points furthering the scope of research and development.
With this in view, NAS-2021 Portal has been developed by NIC as a dynamic platform in consultation with the NCERT, CBSE, UNICEF, DDG (Stats) and NITI Aayog under the overall guidance of Ministry of Education, Government of India.
This portal would be a sustainable educational management information system both for helping in smooth conduct of NAS-2021 as well as for future decision-making based on data analytics.
The portal provides role-based functionality and dashboard for managing the resources (various functionaries involved in the conduct & administration of NAS), activity and event monitoring, capacity building, reporting & documentation, post NAS analytical report in the customized formats.
Galileo Galilei, the famous astronomer, was born in the year 1564 in the town of Pisa, Italy. When he was twenty years old, he was studying in Pisa.
His father wanted him to be a doctor, but Galileo was bored with school except for Mathematics. Because Mathematics was the one subject where he was doing well, the court mathematician offered to tutor him privately so he could become a qualified mathematician.
Galileo's father was disappointed but he agreed.As he needed to earn money, Galileo began experimenting with different things, trying to come up with some sort of invention that he could sell for money. He had a little bit of success with his invention that was like a compass that could be used to measure plots of land.
He had already experimented with pendulums,thermometers and magnets. When he heard that a Dutch inventor had invented something called a spyglass, but was keeping it a secret, Galileo decided to work on one of his own. Within 24 hours, he had invented a telescope that could magnify things to make them appear ten times larger than real life.
One night, he pointed his telescope toward the sky, and made his first of many space observations: the moon was not smooth, like everyone thought.
The moon was covered with bumps and craters. As technology improved, first Galileo, and then many others, made improvements on the telescope, the wonderful device that allows us to see from a distance.
દિવાળી વેકેશન નિયત કરવા બાબત નો પરિપત્ર 28-10-2021 ડાઉનલોડ કરવા માટે અહીં ક્લિક કરો
HTAT મુખ્ય શિક્ષક ને વિવિધ મળવાપાત્ર લાભો ની સ્પષ્ટતા કરવા બાબત 26-10-2021 નો લેટર ડાઉનલોડ કરવા માટે અહીં ક્લિક કરો
Important Links:-
NAS-2021 અમલીકરણ સંદર્ભે પરિપત્ર વાંચવા માટે અહીં ક્લિક કરો
NAS પ્રેક્ટિસ પેપર ધોરણ 3 અહીંથી ડાઉનલોડ કરો
NAS પ્રેક્ટિસ પેપર ધોરણ 5 અહીંથી ડાઉનલોડ કરો
NAS પ્રેક્ટિસ પેપર ધોરણ 8 અહીંથી ડાઉનલોડ કરો
અન્ય જુના પેપર ધોરણ 3 થી 8 અહીંથી ડાઉનલોડ કરો
NAS પેપર જીવન શિક્ષણ અંક અહીંથી ડાઉનલોડ કરો
NAS પ્રેક્ટિસ પેપર ધોરણ 10 અહીંથી ડાઉનલોડ કરો
NAS 2021 સ્કૂલ લિસ્ટ જોવા માટે અહીં ક્લિક કરો
Tag : Paripatra, Primary Circular, Primary Pariptra