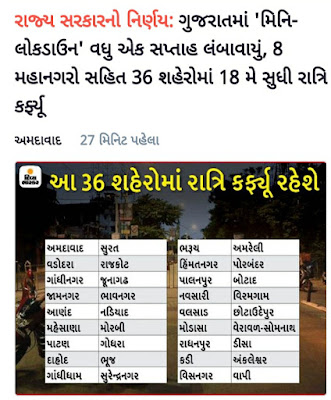 The meeting of the core committee, chaired by Chief Minister Vijay Rupani, discussed at length the success achieved with the cooperation of the people in controlling the cases of Koro in the state. Following the meeting, Corona's curfew and additional limited restrictions have been extended for another week in 36 cities, including eight metros, from 8pm to 6am.

The Chief Minister made it clear at the meeting that as a result of the cooperation and joint efforts of the citizens of the state, the doctors of the health world, Gujarat has succeeded in reducing the number of cases of coronary heart disease control. He added that the number of cases of corona in the state had come down from 14,500 on April 27 to 11,000 yesterday.

This important meeting of the Core Committee also discussed in depth the restrictions that have been imposed in the state, including night curfews in 36 cities, as per the guidelines of the Ministry of Home Affairs, Government of India.

The Chief Minister made it clear that the number of coroner cases in Gujarat has not increased. But considering the prevalence of Koro transition across the country, the Gujarat government has decided to keep the night curfew and additional limited restrictions for one more week to keep all the citizens of the state safe and at least sympathetic.

The Chief Minister thanked the small and big traders, industries and the people of the state for their cooperation in implementing additional restrictions, including night curfew, to curb the transmission of corona in the state. He added that the joint efforts of all have paid off and the number of Corona cases is declining.

He added that the state government has decided to extend the limited restrictions, including night curfew, by one more week in anticipation of the whole situation and to provide more security to the citizens.