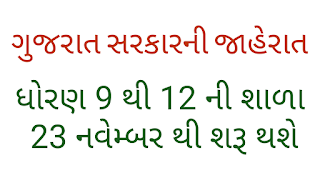 Post Graduate Medical-Paramedical-ITI-Polytechnic will be started in the first phase at school level Std. 9 to 12 and at college level.

A meeting of the state cabinet chaired by Chief Minister Shri Vijaybhai Rupani has taken an important decision to resume education work in secondary and higher secondary schools and colleges in the state after Diwali. 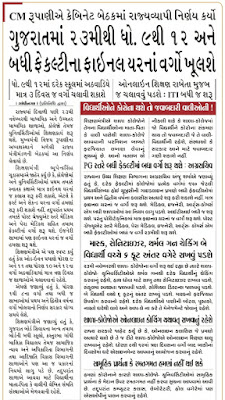 He said that school-college-educational institutions in the country, including Gujarat, had been shut down since March with the intention of preventing the spread of Corona virus Covid-19.

Education under the guidance of the Chief Minister so that the academic year and future of the students are not spoiled The department has also successfully implemented an online learning system.

Under the visionary leadership of Chief Minister Shri Vijaybhai Rupani, public life, economic and industrial activities have not stopped in the state in various phases of lockdown and unlock 1 to 5. That's all | No, online education has ensured that school-college children meet students at home, he added.

Now, the state government of Chief Minister Shri Vijaybhai Rupani in this Unlock-2 of the Government of India With full vigilance in compliance with guidelines and guidelines and maintenance of children's health. It has been decided to resume educational work in schools and colleges in the state in phases.

Accordingly, after the Diwali festival, i.e. from November 29, physical education work will be started in secondary, higher secondary schools and colleges and universities in the state, the details were given by the Education Minister.

Shri Bhupendrasinh Chudasama said that before coming to the final conclusion of this decision, the government has made a final decision by holding a round of meetings with various stakeholders like education department, school-college, university administrators-academics.

The decision has also been unanimously approved in the Cabinet meeting chaired by the Chief Minister.

This SOP will be equally applicable to all Government, Grant-in-Aid and Self Finance Schools, Kasturba Gandhi Balika Vidyalaya, Social Justice and Empowerment Department as well as Tribal Development Department schools of all the boards in the state.

Next date From November 26, schools of Std-9 to 1 as well as P.G. Medical-Paramedical | In addition, undergraduate final year classes will begin.

Shri Bhupendrasinh Chudasama clearly stated that the attendance of students is not made compulsory.

Institutions will also have to get the written consent of the student's parents to come to the school, it has been suggested. Each student has their own mask, water bottle, books, snacks etc. from home He will also be asked to see if Lave does not interact with other students, he added.

According to the revised seating arrangement in the classroom, there should be a distance of at least 6 feet between the two students. School-colleges have also been given sOP to use commuter hall, laboratory, library for seating arrangement of students if the size of classroom is small.

Hygiene facility in each campus before starting school-colleges, student with thermal gun | Soap arrangements for checking, sanitizer and hand washing should be ensured. In classrooms and | Not only is social distance maintained in the school-college complex, the use of masks is also mandatory and medical services are available at close proximity to the school-college.

Mass Prayer - Also instructed not to play sports or other group activities on the field Parents only use their personal transportation to get the child to and from school. Will be encouraged. Schools for students who use public transport Appropriate precautionary guidance will be given by. His role was given by the Minister of Education.

The Education Minister said that the vehicle used as a school bus should be used at least twice a day Instructions have also been given to sanitize the bar as well as to keep the window-glass of such vehicle open.

He added that in compliance with the SOP of the Government of India, school administrators, teachers, parents.