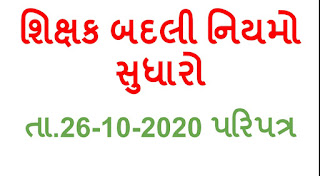 (1) dated 3/2017 of the department. Subsequent amendments have been published in the resolutions under reference (2)

The provisions made by the resolution under reference (2) of this department dated 7/06/2017 are similar to those of the non-transferable employees of the Public Service Commission.

Taking into consideration the 5 reports received through the General Administration Department and the above mentioned report made by the Director, Primary Education as well as various related issues, the decision under the reference (1) of this department dated 7/06/2017, dated 15/06/201.

Considering all the above matters, at the end of the adult deliberation of the department, the following amendments are published in the resolutions of this department dated 7/02/2018, dated 18/06/2017 as well as dated 7/06/2018.

(A) Secretariat Services of Gujarat Government,

Even if all the conditions mentioned above are satisfied, the net available in the district of the place of their non-replaceable fee. Vacancies can be changed accordingly. That is, in Gandhinagar, the husband / wife of the two new Andhakari Shri was transferred to Gandhinagar In the district and name. The husband / wife of the officer / employee performing 5 at Gujarat High Court can be transferred to Ahmedabad district.

In the above case, the prescribed specimen shown in the attached appendix by Andhakari Shri, who is not descending from Class-1 in charge of the Mathekam of the concerned administrative department. Certificate issued as proof

Deputation of the concerned blacksmith / employee in any case mentioned in this page Meanwhile, the location of the fugitive will not have to be taken into consideration. In all such cases, the husband / wife will have to submit the marriage certificate issued by the registrar regarding his / her marriage registration.