In the matter of children's Admission Process In 84 Model Schools and 12 KGBV. 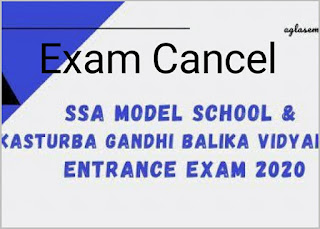 Reference; Respect. Pursuant to the order received from the Secretary (Primary and Secondary Education)

According to the above subject and context, as decided earlier, the entrance examination of children from standard 6 to 9 in model schools and KGBV had to be done through examinations but at present it is not possible to conduct examinations in the situation of epidemic spread by Covid-19 virus.

Under the consultation of the Secretary-Education, it has been decided to give merit based admission to children in 8 Model Schools and 15 Model Day Schools and 12 KGBVs. 12 KG, b. V. Immediate action must be taken. (Along with this, Model School, Model KGBV is included.) 1. Applications sought by the State Examination Board for the entrance examination are about 21000.

Only children will be eligible for admission on merit. 3, for example, if a child wants to get admission in Std.

4. Admission of all children by making merit list as suggested in school wise issue no.Admission will be given to meritorious children.

5. Hence in addition to online applications as mentioned in Issue-1, Model School / Model Day School (KGBV) Other children in the taluka who have not applied online. Even if the result of such children is as per issue 2, then those children are eligible for admission. O., CRC co. O. Encouraged by admission to that school Will have to give.

6. Minimum 50% reservation for girls. If there are not enough applications from girls, then these places Will have to be filled with boys.

7. KGBV in Model School and Model Day School. The girls will have to be given first priority. Model School and KGBV. Type- (2) is both in the same campus. Hence, the KGBV. Daughters of Education should be planned in the model school itself.

Admission must be completed. Is. Immediately after the completion of the admission process. In and u. Letter No. from the Board of Education: Mumshab / SSC /

As per the letter dated 01/04/2050, unit test on assessment of homecoming has been organized for the students of Std-9 to Std.

Which is meant to be implemented. 10. Recruitment of teachers as per the rules from the state level as per the establishment of the model school eligible to be met at the same time.

Until then, primary (02), secondary (05) and higher secondary (08) traveling teachers have been filled.

11. In the same way, according to the establishment of Model Day School, as far as the teachers from the state level are concerned.

Traveling teachers in primary (02), secondary (05) and higher secondary (03) till recruitment.

12. Achieve the purpose of the School of Excellence by taking immediate action on the above 1 to 11 issues.