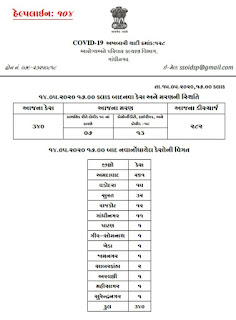 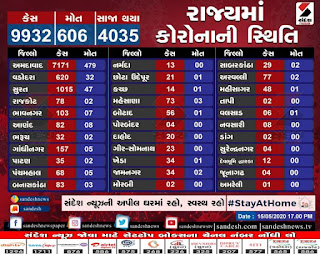 Thus the total number of corona positive cases in the state has reached 9932. The death toll has risen to 606 so far. So a total of 4035 patients have been discharged in the state. The rate of discharge in Gujarat is 40.62 percent.

Today, the number of infected people in Maharashtra has crossed 27,000. So on the other hand now Tamil Nadu has come second with 9674 patients. Gujarat also ranks third with 9,592 infected people. All these figures are as per the information received from covid19india.org and the state government.

On Friday, 154 patients were found in Rajasthan, 102 in Andhra Pradesh, 45 in Karnataka, 06 in Bihar, 02 in Punjab and 1 in Himachal Pradesh. These figures are based on information from covid19india.org and the state government.

In the last 24 hours, 261 cases were reported in Ahmedabad, 15 in Vadodara, 32 in Surat, 12 in Rajkot, 11 in Gandhinagar, one each in Gir Somnath-Kheda-Jamnagar-Aravalli-Mahisagar-Surendranagar and 2 cases in Sabarkantha.