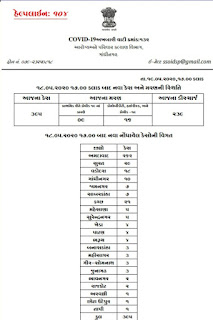 Corona virus has become uncontrollable in Gujarat. Despite the day and night efforts of the state government and the system, it is becoming difficult to control the corona virus, especially in Ahmedabad, which is deteriorating day by day instead of improving.

In the midst of all this, Jayanti Ravi, the front secretary of the state government's health department, gave information about the number of cases of corona virus reported across the state in the last 24 hours through a press conference.


262 new cases of corona virus were reported in Ahmedabad

The number of corona patients across the state rose to 12,141

Jayanti Ravi, Principal Secretary, Health Department, while giving details of corona cases in Gujarat in the last 24 hours, said that a total of 395 new corona virus cases have been reported in the last 24 hours. At the same time, the total number of corona patients in the state has reached 12,141.

262 new cases of corona were reported in Ahmedabad

Let me tell you that so far a total of 52 cases have been reported in the state out of which 45 are currently active cases. So far one person has died during treatment. In the last 24 hours, 239 patients in the state have been discharged from the hospital after being treated for the corona virus. So far, a total of 5,043 patients across the state have undergone coronary heart disease.

Details of patients who died in the state in 24 hours

Currently 49 patients on ventilator in Gujarat

Addressing a press conference, Health Secretary Jayanti Ravi further said that currently 49 patients of Corona are on ventilator in the state. At the same time people are stable. Informing about today's test, the health department further said that a total of 154674 tests were conducted in the state. Of which 12141 have come positive while 142533 reports have come negative.