Good news from ISRO, Lander's record on the moon's surface is absolutely safe 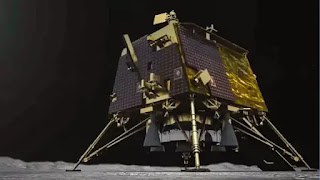 Chandrayaan-2’s ‘Vikram’ lander is lying in a titled position on the surface of the moon but is in one piece, an official of the Indian Space Research Organisation has said amid efforts by the space agency to re-establish communication with it.
Vikram lander, named after the father of India’s space programme Vikram Sarabhai, had lost contact with the orbiter of the Chandrayaan-2 mission two minutes after it was to soft-land on the lunar surface near the moon’s south pole. Isro chief K Sivan had yesterday said the lunar orbiter, which is going around the moon at an altitude of 100km, had taken a thermal image of the lander on the moon’s surface. The orbiter’s camera is the highest resolution camera in any lunar mission so far. The effort to re-establish contact would continue for 14 days from Saturday – the mission life of the lander.
The thermal image, an ISRO official said, shows that the lander had a hard-landing close to the location where it was planned to touchdown. “The lander is there as a single piece, not broken into pieces. It’s in a tilted position,” an ISRO official associated with the mission said on Monday, according to news agency PTI.
Also Watch: Chandrayaan 2: Lander Vikram located, attempt on to establish contact
Chandrayaan 2: Lander Vikram located, attempt on to establish contact
ISRO has said that the lander Vikram has now been located on the surface of the moon and scientists are now trying to establish contact with it.

ISRO and its chief Sivan have, however, underscored that even if the lander and the rover, Pragyan, are intact, they would not be able to transmit any scientific data without any communication.

ISRO Recruitment 2019: Applications Invited for 86 Technician B, Draughtsman and Technical Asst Post
Isro has described Chandrayaan-2 as a highly complex mission that represented a “significant technological leap”.
Vikram carried three payloads Radio Anatomy of Moon Bound Hypersensitive Ionosphere and Atmosphere (RAMBHA), Chandra’s Surface Thermo-physical Experiment (ChaSTE) and Instrument for Lunar Seismic Activity (ILSA).
Officials have indicated that the inverted or titled position of the lander had reduced the possibility of success in re-establishing contact with the lander since the antennas had to be pointed towards the ground station or the orbiter.
Quoting an Isro official, news agency PTI said the lander generating power was not an area of concern since it has “solar panels all around it” and it also has “internal batteries” which “are not used much.”
A soft-landing of the lander would have put India in an elite group of four nations along with the US, erstwhile Soviet Union, and China to have successfully landed on the lunar surface. It would have made Chandrayaan-2 the first mission to land near the South Pole of the Moon; all other missions have been in a region between the equator and 30 to 40 degrees north and south of it.
The trajectory taken by the Chandrayaan-2 spacecraft ensured that the orbiter had spare fuel and the mission might stay in the lunar orbit for seven-and-a-half years instead of the planned one year.
Click Here To View The News Report
Tag : News Report