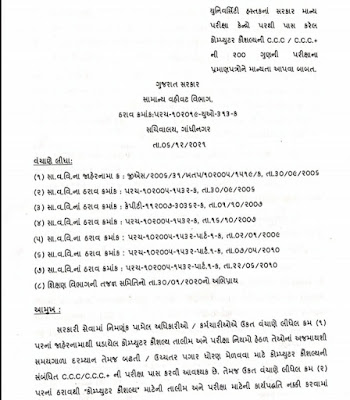 Officers / employees appointed in the government service have to pass c.c.c / c. As well as the resolution on order (2) taken from the above reading, the procedure for training and examination for commuter skills has been decided.

The examination of ccc / ccc + of relevant computer skills for higher pay scale has to be passed from the examination centers approved by the Government. Officers / employees have to pass the ccc / ccc + examination of this commuter skill as per the prescribed syllabus in a total of 100 marks in two parts namely 60 marks - Theory and 50 marks - Practical.

Dr. Babasaheb Ambedkar Open University also conducts an examination of 200 marks as per the syllabus of the university, and the officers / employees appointed in the government service are given certificates of passing these 200 marks examination.

Accordingly, by the officers / employees appointed in the government service, they have given Dr. Certificates of 200 marks of ccc / ccc + related to computer skills passed from government recognized examination centers of Babasaheb Ambedkar Open University are presented for validation for their promotion / higher salary standard, but these certificates are prescribed by the state government.

These certificates were not considered valid as they were not in accordance with Theory and 50 marks - Practical, 100 marks in total. . Thus, Dr. Many discrepancies have arisen with regard to the 200 marks examination certificates of Babasaheb Ambedkar Open University for computer skills related to c.c.c / c.c.c. +, name in this regard. SCA filed in High Court No. Name as per judgment in 1912/2017. Dr. by the High Court. Orders have been issued to validate the examination certificates passed through Babasaheb Ambedkar Open University