Prime Minister Narendra Modi Will Address The Nation At 5 PM, May Announce Corona Location And Vaccine

Prime Minister Narendra Modi Will Address The Nation At 5 PM, May Announce Corona Location And VaccinePM Modi did not specify but many speculated that his address could be on the coronavirus situation on the verge of festivals across the country. 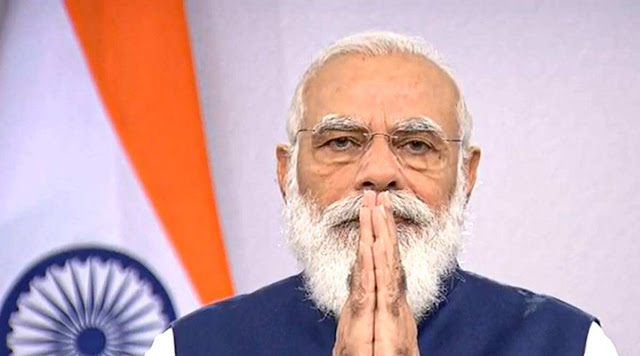 PM Narendra Modi address to nation today Live Updates: Prime Minister Narendra Modi will address the nation today. Taking to Twitter, the prime minister wrote, “Will be sharing a message with my fellow citizens at 6 PM this evening.” While the prime minister has not specified what his address will be about, it is likely that he will speak about the coronavirus situation in the country. 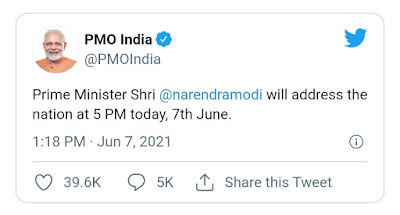 1. According to sources, Narendra Modi can talk about vaccination. It can raise awareness about vaccination as well as clarify its stock and availability status.2. Anything can be announced before the third wave of Corona in the country.3. Anything can be announced for the damage done to the country’s economy during the Corona.4. Unlock is going on in many states in the country, meanwhile a message of caution can also be given.5. The challenges of the health sector can be discussed in view of the third wave.In the previous message, Modi had said these 5 things. I would also urge states to use lockdown as a last resort. Every effort has to be made to avoid lockdown. The focus is on the micro content zone. 2. He spoke on Navratri, Ram Navami and Ramzan. Limits Purushotam Shriram's message to all of us is that we should abide by the limits. Whatever measures you take to avoid corona should be strictly adhered to. Even medicine, even a cauldron. Ramadan teaches us patience, restraint, discipline. Discipline is needed in the fight against Corona. Exit only when needed. 3. The country is once again fighting a very big battle against Corona. The second wave came as a storm. I have experienced the pain that people have endured, the pain that they are enduring. My condolences to all those who have lost their loved ones in the last few days. 4. All the doctors of the country, including medical-para-medical staff, cleaners, ambulance drivers, security forces, policemen deserve all praise. You even risked your life in the first wave of Corona. Today you are back on duty day and night. 5. This time the demand for oxygen has increased in many parts of the country due to the crisis of corona. The central government, the state government, the private sector are all trying their best to provide oxygen to the needy. Measures are also being taken at many levels to increase oxygen production and supply.India on Tuesday reported less than 50,000 new cases for the first time in nearly three months. With 46,790 new cases reported across the country, the coronavirus infection has now affected close to 7.6 million people in India. As many as 587 deaths were reported in the last 24 hours, taking the toll to 1,15,197.Active cases of COVID-19 in India are less than 10 per cent of the total caseload, while the number of people who have recuperated from the disease has crossed 67 lakh pushing the national recovery rate to 88.63 per cent, the Union Health Ministry said on Tuesday. There are 7,48,538 active cases of coronavirus infection as on date which comprise merely 9.85 per cent of the total caseload. “The slide in active cases is supplemented by an exponential rise in recoveries,” the ministry said.Prime Minister Narendra Modi has tweeted that he will address the nation at 5 pm today. "Will be sharing a message with my fellow citizens at 5 pm this evening," PM Modi wrote in his tweet, urging citizens to tune in.The Prime Minister did not specify but many speculated he would speak on the coronavirus situation in the country on the verge of a series of festivals and the approaching winter.This will be his seventh address to the nation since he announced a strict lockdown in March-end to check the spread of the coronavirus. Since June, the nation has been exiting the restrictions in phases in order to reopen the economy.Experts have raised concerns that alongside the unlock rules, the festival season may lead to a surge in infections.India's COVID-19 tally is close to 76 lakhs but for the first time in nearly three months, the country has recorded less than 50,000 new cases in a day. The health ministry reported 46,790 fresh cases in the last 24 hours, which takes the overall cases to 75,97,063.The last time new Covid cases were below 50,000 was on July 23, when India recorded 45,720 new cases in a day.The government recently said the country has crossed its coronavirus peak as its daily average cases have tapered against a high of more than 90,000 daily cases logged in mid-September.PM Modi said India has one of the highest recovery rates because it was one of the first countries to adopt a flexible lockdown. He added that the country is already working on putting a well-established vaccine delivery mechanism in place."Today we are seeing a decline in the number of cases per day and in the growth rate of cases. India has one of the highest recovery rates--88 per cent. This happened because India was one of the first countries to adopt a flexible lockdown when the total cases were just a few hundred," the PM said.
IMPORTANT LINKS:-News18 Gujarati Live :: Click HereAaj Tak Live :: Click HereWATCH LIVE PM MODI :CLICK HERE
Tag : Live TV, Man Ki Baat- PM Modi, PM's Message