With reference 1 and 2, the districts have been allotted by the Education Department to the Assistant Education Inspectors performing their duties under the District Primary Education Officers of the District Panchayat.

His research is ordered to be promoted to the post of Taluka Primary Education Officer (Class-II) in the following details for public service and administrative interest as per reference-2 by the office here. 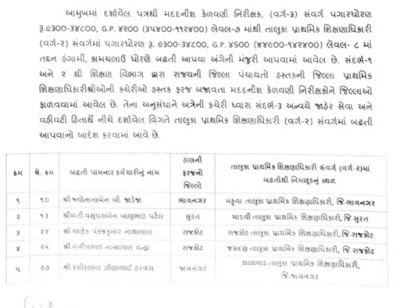 The above promotion will be subject to the following conditions.

Employees will be prosecuted under the provisions of the Rules of Service Discipline and Appeal if they do not appear at the place of promotion except in circumstances beyond their control.

If the employee does not appear immediately on day-3 after receiving the order at the place of promotion, action will be taken as per the provision of the circular dated 3/06/195 of the General Administration Department.

As well as S.A.V. Circular No.-PEN-104-6-G, dated 30/11/195 and from time to time as per the provisions of the circular / resolution of the Government, the rank should be decided. Deaddates, rankings, pay discrepancies or any other questions may be raised in this regard in future.

If the employee refuses the promotion, action will be taken against him for refund of higher pay scale as per the provision of Resolution 6 (30) of the Finance Department dated 19/06/18.

These temporary promotions will be subject to the final judgment of the civil cases if any civil cases are pending in the name of the Gujarat High Court or other courts.

They shall perform any duty assigned to them by the Government and shall be transferable at any place in the State.

Must pass any examination prescribed by the Government and any other prescribed. If the exam pass is decided within the stipulated time limit, the subsequent increment will be withheld till they pass the exam.

The present report should be sent to the office here through the concerned office. This order shall be enforced with immediate effect.