Beranda » News Report » News Report (School) » Application In the High Court of The Guardians with the Demand to Cancel the Board Examination of Std.10 and Give Mass Promotion to the Students.

Application In the High Court of The Guardians with the Demand to Cancel the Board Examination of Std.10 and Give Mass Promotion to the Students.

Application In the High Court of The Guardians with the Demand to Cancel the Board Examination of Std.10 and Give Mass Promotion to the Students.

Due to uncontrollable corona in Gujarat, mass promotion has been given to students of Std. 1 to 9 and Std. 11, while Std. 10 and 12 examinations have been postponed. 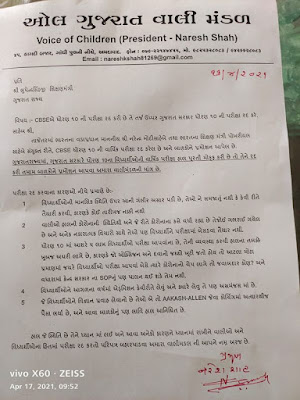 Then the All Gujarat Board of Guardians has filed a petition in the Gujarat High Court postponing the Std. 10 examination and giving mass promotion to the students. The petition also alleges that board exams have been canceled in other states.

Earlier, the board had written a letter to the state government, but without taking any decision, it has finally applied to the high court.

Parents Association's Demand For Cancellation of Board Examination

Talking to media in this regard, Naresh Shah, President of Wali Mandal, said that approximately 13 lakh students of Std. 10 to 12 will appear for the examination in Gujarat. Several states in India have suspended or postponed the exam. Seeing this situation, parents from all over the state approached us and there has been a discussion for the cancellation of the examination.

As the state government has not taken any decision on this issue, now we have to surrender to the Gujarat High Court. In the petition filed in the Gujarat High Court, it has been submitted that 7 states of the country have canceled the standard 10 examination. These include states like Haryana, Uttarakhand, Punjab, New Delhi, Tamil Nadu, Jammu and Kashmir and Maharashtra.

Students, teachers and parents are at risk of coronation if the exam is held

In addition, the CBSC and ICSC have also canceled the examination in view of Corona's condition. Many attempts have been made to control Corona in Gujarat. Yet cases are on the rise.

The petitioner has submitted in the petition that if the board examination of standard 10 is held, not only the students but also the teachers and parents will come to the school on the day of the examination and a crowd will gather in and around the schools.

Therefore, it is imperative that the standard 10 examination be canceled. The result will be declared by the CBSC based on the past performance of the students.

The education department and the state government still seem to be confused about taking the standard 10 and 12 exams. While the CBSE board and other states have given mass promotion in standard 10 due to increasing cases of corona, no decision has been taken by the board in Gujarat yet.

The parents have also written to the Chief Minister and the Education Department to cancel the examination, but no decision has been taken yet.

DivyaBhaskar had an exclusive conversation with Dinesh Patel, Secretary, Board of Secondary Education. In the conversation, he said that the review meeting will be held on May 15. This meeting will decide on the standard 10 and 12 examinations.

It is difficult to arrange an examination system between unruly corona

More than 10 lakh students are to appear in standard 10. It seems very difficult to manage at the present stage, because if the amount of oxygen and medicine is missing, then who is responsible if such a large number of students sit for exams and get infected with corona?

0 Komentar untuk "Application In the High Court of The Guardians with the Demand to Cancel the Board Examination of Std.10 and Give Mass Promotion to the Students."