Matter of conducting and recruiting Head Masters Aptitude Test- (HMAT) examination for the recruitment of principals in non-government aided secondary and higher secondary schools of the State. 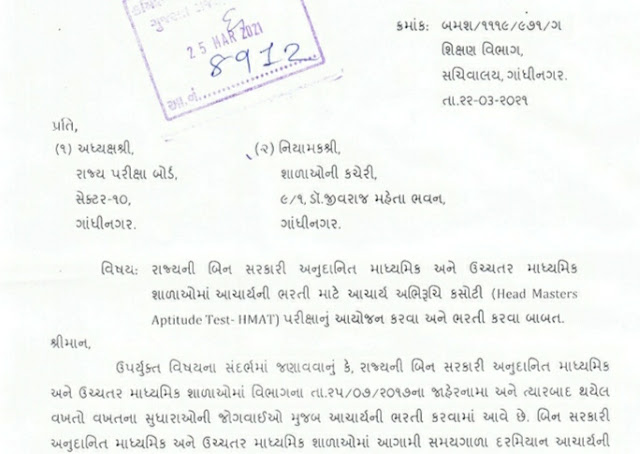 In the above subject, it is stated that in the non-government aided secondary and higher secondary schools of the state, the principal is recruited as per the provisions of the department's notification dated 7/06/2017 and the amendments made from time to time thereafter.

The State Board of Examinations is directed to conduct Head Masters Aptitude Test (HMAT) in non-government aided secondary and higher secondary schools in the forthcoming period and then direct the Office of the Director of Schools to take action for recruitment. . The two offices will have to take action in consultation with each other.

In addition, at the time of planning of the examination / recruitment in this regard, it is ensured that the qualified candidates are examined / recruited after verification of the qualifications and experience prescribed in the notification of the department dated 3/06/2018 and the amendments made in it from time to time There is a request to do.