Education Minister's Announcement:Standard 9 and 11 schools in the State Will Start From February 1, Tuition Classes Have Also Been Approved.

Education Minister's Announcement:Standard 9 and 11 schools in the State Will Start From February 1, Tuition Classes Have Also Been Approved.

Offline teaching began at the school.

The decision to open a hostel will be taken after study

The admission process of students of Std. 9 to 12 in the state has been extended till January 31 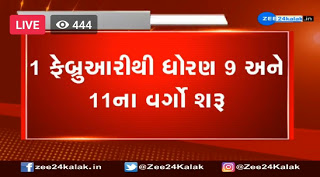 In the year 2020, a lockdown was imposed due to the Corona epidemic, in which online education was started in schools and colleges by stopping offline education so that children would not be deprived of education. Now in the new year, on January 11, standard 10 and 12 schools were started in the state.

Now after the completion of the cabinet level meeting chaired by the Chief Minister in Gandhinagar, the state's Education Minister Bhupendrasinh Chudasama has announced that Std 9 and 11 schools in the state will be started from February 1.

It is also allowed to start tuition classes as per Corona's guidelines. To start Std. 9th and 11th classes, the guidelines announced by the Department of Education on January 8 must be followed.

According to the circular of the District Education Officer, considering the representations received by the Gujarat Board of Secondary and Higher Secondary Education, in the situation of Corona, students who have been deprived of admission in Std. 9 to 12 in the academic year 2020-21 can be admitted to the school till January 31.

The deadline for admission of students who have been denied admission due to the situation of Kovid-19 has been extended four times and the admission process has already been completed by the schools. Students are given this last chance to get admission in the school.

The students came to the school enthusiastically.

Standard 10 and 12 schools were started in the state on January 11, nine months after the Corona epidemic. The students came to the school with joy and enthusiasm. The joy of starting schools could be clearly seen on the faces of parents and teachers. All the students entered the school following the government's SOP.

Schools and parents have to take care of these things:-

0 Komentar untuk "Education Minister's Announcement:Standard 9 and 11 schools in the State Will Start From February 1, Tuition Classes Have Also Been Approved."