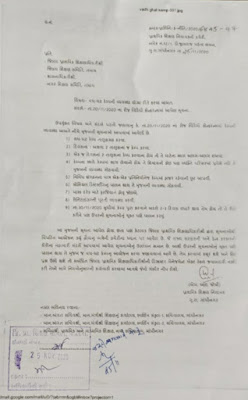 ll be closed and merged with other nearby schools. Classes with less than 20 Std. 6, 7 will be locked. Start of merging schools in different districts of the state: In the village or other near the village.

The order to merge the school has been issued to Navgujarat Time Ahmedabad. In schools with a large number of students, the work of Std. 8 has also started. The merger will have to start a gradual class from Std. 1 in the state at present. Instructions have been made by the department for.

The government will have to merge the number of students in Std. 8 and 9 with less than 30 students in Std. 8 and less than 50 in Std. 8 in the nearest upper primary schools due to the number of mergers in the nearest school. Has decided. In schools where Std. 1 to 8 running Std. 8 classes will be included in the school to be closed, so that the children in this school from the date of receipt of the order, there will be less than 50 in Std.
While in the schools in which the study in these primary schools will have to close Std. 8 to be admitted in the nearest primary school. In the same way in schools where the responsibility of providing more facilities to more than 50 students in Std. 8 class is merged, the school which is running from Std. 1 to 8 and has the number of students in Std. 6 and 8 and the subject is close to the headmaster. Will remain.
In a school where the number is less than the upper 50, the standard is merged with the school with a graduate teacher of Std. 6 and 8 in the closed schools of Std. 6 and 8. The number of students in the schools will have to start classes. In addition to what remains.
As well as the need for transportation for the children of the teachers of that school is less, they will have to send a proposal to the concerned office by making maximum use of Std. 1 to 8 running in other nearby schools, which will be merged. Regarding this operation, among the schools which can get Std. Due to which the upper standard is merged in the schools of the state.
Circulars have been issued in many districts of the state and less than 50 students in 8 have come to different districts. Thus, in order to merge Std. 9 and schools in the schools which have many schools in the state again, the necessary and clear more locks up to the camp will have to be closed.
Important Link:-
Download Paripatra : Click Here
Tag : General G. R., Primary Pariptra