Beranda » RTE ADMISSION » RTE FAQ || Official Answers To Frequently Asked Questions From Parents Of Students While Getting Admission In Std.1 Under RTE Act

RTE FAQ || Official Answers To Frequently Asked Questions From Parents Of Students While Getting Admission In Std.1 Under RTE Act

Official Answers To Frequently Asked Questions From Parents Of Students While Getting Admission In Std.1 Under RTE Act

Admission obtained under RTE is revocable.Why?


Admission obtained under RTE is eligible for cancellation in the following circumstances.

1. The supporting evidence submitted by the guardian of the admitted child for admission can be verified at any stage by the school / government system, if any evidence including income proof is found to be valid, if the evidence is found to be invalid at the end of the proof-proof. Will be canceled from the completion of the academic year, and action will be taken as per rules from the concerned District Education Officer / District Primary Education Officer level for presenting false supporting evidence against the guardian. 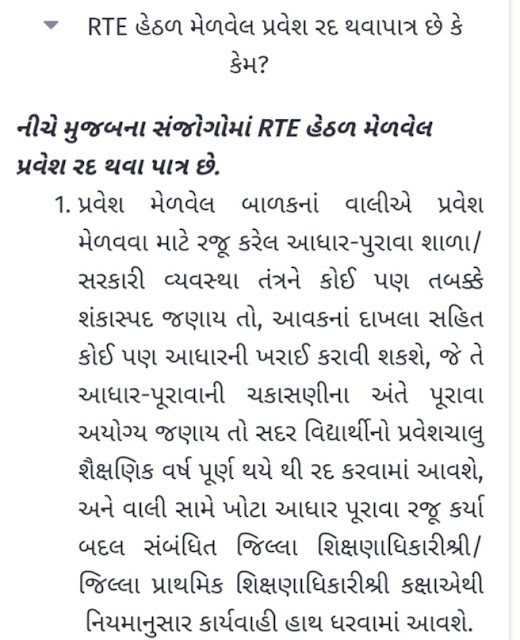 2. If the income of the guardian of the students admitted under the Sundar Yojana exceeds the fixed income limit in the next financial year after admission, the guardian has to cancel the admission by informing the concerned officer in writing through the school admitted. That is, if the income of a guardian exceeds the prescribed limit in the following years after getting admission under this scheme, the benefit of the said scheme will not be available. In case the name of the father of the child admitted under BPL category is canceled from BPL category, the school admitted by the guardian .Admission will have to be canceled by informing the concerned officer in writing through the school. In this case, the admission will have to be canceled after the completion of that academic year and thus the assistance given by the state government to the school and the student under these rules will not be available. If the parent wishes, he / she can continue to enroll his / her child as a normal student in that school by paying the fee fixed by the school. 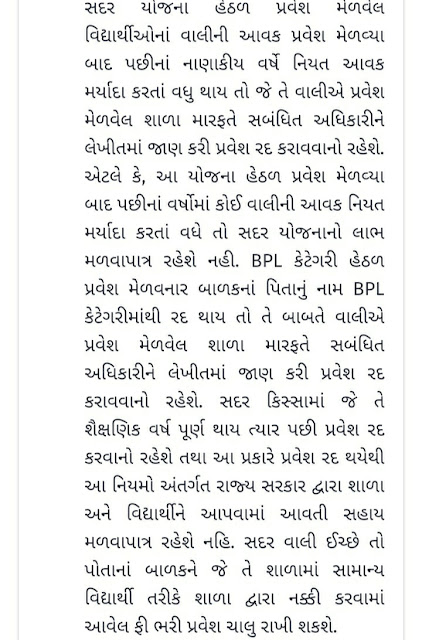 3. In case of only daughter (single girl child) only one daughter is born by the parents in the same pregnancy and only one daughter will be considered and no child (son / daughter) should have been born before or after the birth of such daughter. And if this benefit is given under these rules, then if any child is born, the financial assistance taken under these rules will have to be returned and the admission will have to be canceled after the completion of the current academic year. In such a case, after the cancellation of admission, if the parent / guardian wishes, he / she can continue the admission to his / her daughter as a normal student by paying the fee fixed by the school. 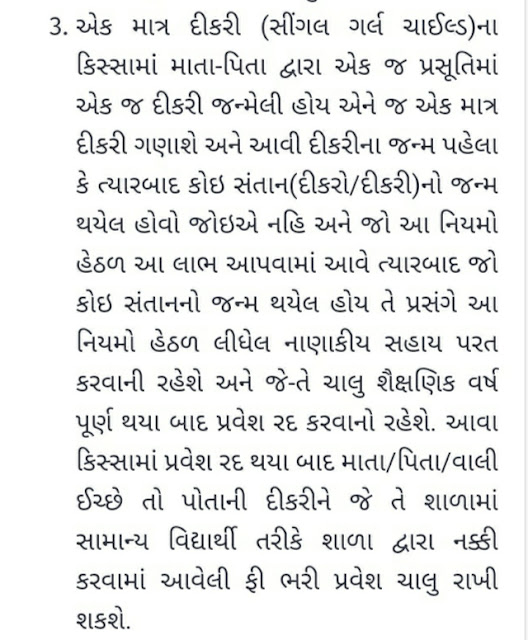 If there is a rented house, what evidence will be considered valid as proof of residence?


Any one of the following documents will be considered valid as proof of the child's residence.

(1) Ration card issued in the name of the parents in which the name of the child is mentioned
(2) Voter ID card of one of the parents
(3) Electricity bill / water bill / one passport of parent or child
(4) Aadhaar card
(5) Registered lease agreement (Notarized lease agreement will not be considered valid) (Must be accompanied by lease registered as per Gujarat Stamp Act, 18 and with the basis of submission to the police station of the concerned area) After registration of the lease This will have to be done and an advanced certificate of income will have to be obtained keeping in view this lease agreement, light bill and other expenses-income. 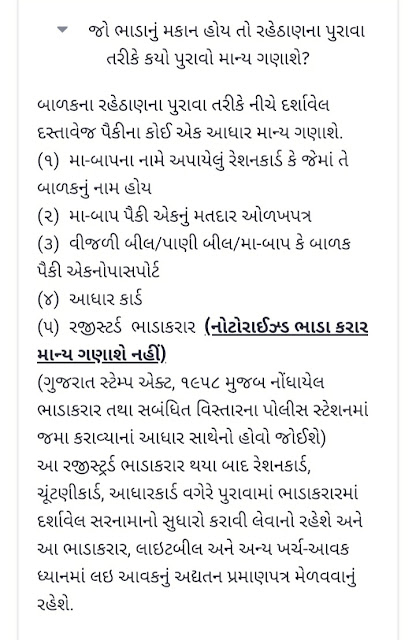 What to do in case the school refuses admission? 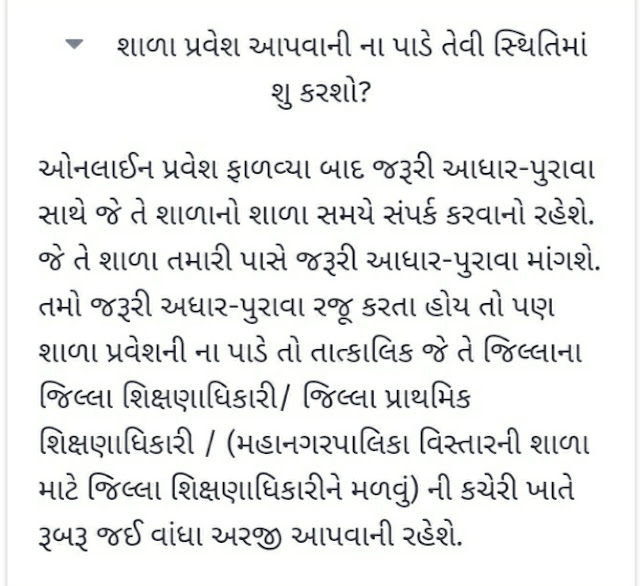 Can the selection of schools be changed at the end of the first round of RTE admission and before the second round?

RTE admission of a student who does not get admission within the time limit will be canceled. Students who are denied admission at the end of the first round will be able to go to the web portal, log in with their application number and date of birth and re-select the schools of their choice from the available schools with vacancies. 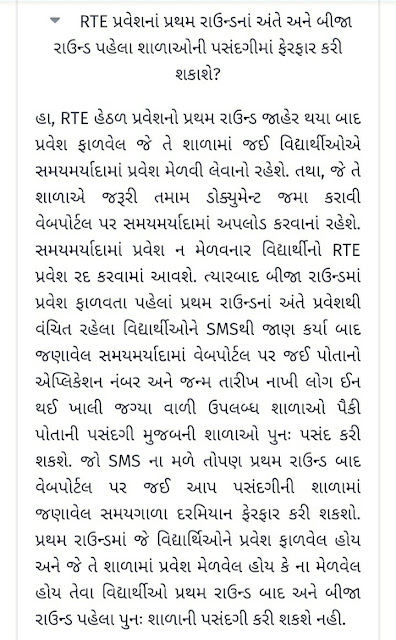 Which categories are allotted admission under RTE in order of priority?


The school allotment will be done as per the order of the following categories as per the resolution.

1. Orphaned child
2. A child in need of care and protection
3. Kindergarten children
4. Children of child labor / migrant labor
5. Children with Dementia / Cerebral Palsy, Children with Special Needs / Physically Handicapped and Handicapped
6. (ART) Children receiving treatment with anti-retroviral therapy
7. Children of military / paramilitary / police personnel martyred during duty
8. A daughter whose parents have an only child and that child is only a daughter 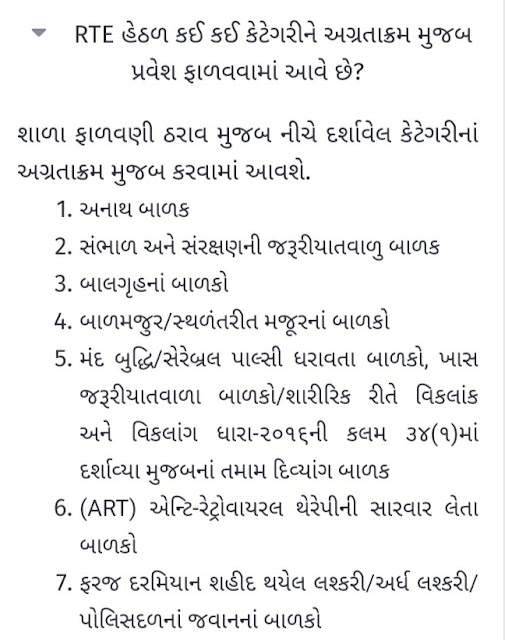 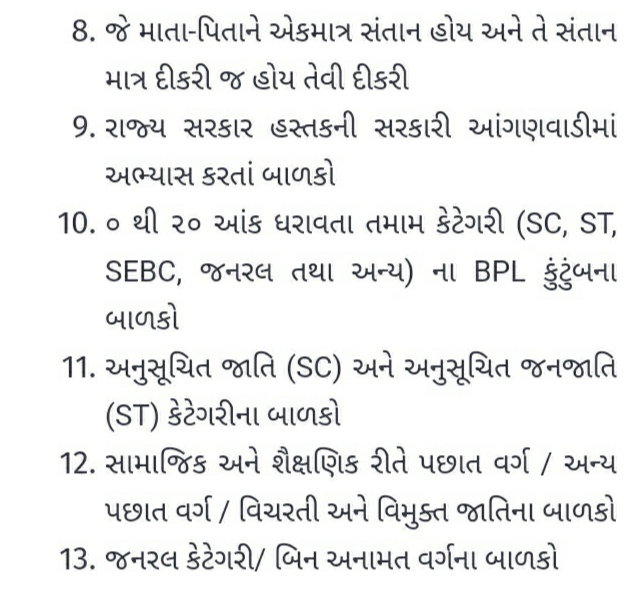 0 Komentar untuk "RTE FAQ || Official Answers To Frequently Asked Questions From Parents Of Students While Getting Admission In Std.1 Under RTE Act"