The Corona virus was the highest case of 208 cases on Monday. The first case came up against 151 cases on March 27. On Monday, 35 patients were found in Maharashtra and 32 in Kerala. Apart from this, there has been a positive report of 1-1 in Delhi, 25 in Uttar Pradesh, 24 in Chandigarh, 5 in Punjab, 2 in Andhra Pradesh, Chhattisgarh, West Bengal, Haryana and Andaman-Nicobar.


The total number of infected persons has now increased to 1 thousand 347. These statistics are according to the covid19india.org website. The number of infected till now in the government statistics is 1251. 101 of which have recovered.
The health ministry said the transition has not yet reached the community level The Ministry of Health said on Monday that the transmission of corona virus in the country has not yet reached the community level, which is being transmitted at the local level.

"Everybody in the society will have to collaborate, or whatever consequences have come to prevent the transition so far, all will go wrong," Joint Secretary of the Ministry Love Agarwal said. He has since appealed that 100 per cent of people remain alert and contribute to the country to get rid of the disease. Love Agarwal said, "If anyone suspects that he is infected, please do not hide him." 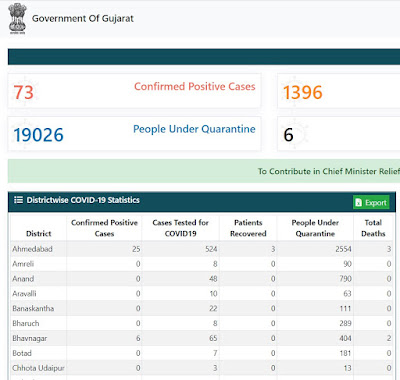 Madhya Pradesh; Total infected -47: 8 new cases were here on Monday. Infection was found in Indore and 7 in Ujjain. The number of infected persons has increased to 27 in Indore. Considering the epidemic, the crowd in the prison is being reduced.

The state government will release about 8,000 prisoners on interim bail on parole. The process has been started. Five thousand convicted prisoners are being given parole for 60 days. However, after considering the provision of 5 years sentence, about 3,000 prisoners are being given interim bail of 45 days.
Uttar Pradesh; Total Infected - 96 The number of infected in Uttar Pradesh has increased to 96. There were 24 new cases on Monday. The highest 36 Corona positives were found in Gautam Buddha Nagar. Then there is (13) in Meerut.

Delhi; Of the total infected-97s, there were only 25 cases on Monday. There have been major negligence. More than 5,000 people arrived in Nizamuddin area from March 1 to 15 at Tablighi Jamaat. Indonesia, Malaysia and Thailand were also involved.

Even after the lockdown was announced on March 22, 2000 people were stopped here Of which 200 are suspected to be infected. The suspect has been sent to the hospital for investigation. He complains of colds, coughs. 1200 people have been evacuated from here. The Telangana government said late last night that six people who had joined the program had been killed. 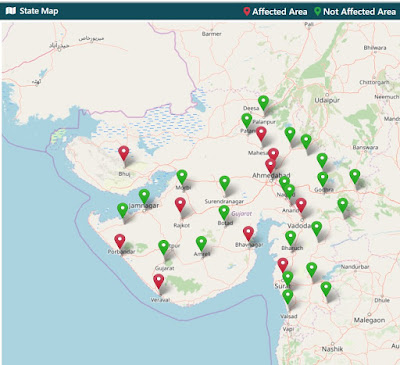 Chhattisgarh; Total Infected - 8 Chief Minister Bhupesh Baghel visited several areas of Raipur on Monday and reviewed the supply and availability of essential goods. In the last 24 hours, 50 people in the state were investigated for coronas, but the good news is that everyone's reports have come back negative.
Rajasthan; Total infected -79: 10 new cases were reported on Monday in the state, of which 2 were found in Jaipur, 1 in Bhilwara and 7 in Jodhpur. In Ajmer on Sunday night, 3 people were reported positive.

Maharashtra; Total infected -238: 35 new cases came up on Monday. Mumbai has the highest 75 patients. Besides, there are 42 patients in Pune, 25 in Sanghali and 12 in Nagpur. So far 39 patients have recovered in the state.
Punjab; Total infected-41: Three new positives were found in the state on Monday. A 21-year-old youth was found infected in Ramnagar Senia village in Patiala district. Also back in Nepal. The local system has sealed the entire village as part of the alert. His family has been appealed to stay at home.
IMPORTANT LINK: