Google input tools keyboard shortcut very useful for all of us

Ever since the invention of Google, we have been receiving new services through Google. Thanks to Google, many of our operations have been made easier and faster. Google input tools Excellent service provided by Google. 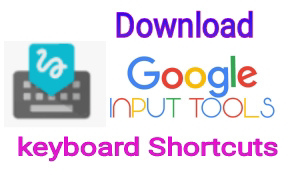 What is Google input tools ?


Google IME is a set of typing tools (input method editors) by Google. Google input tool for 22 languages, including Amharic, Arabic, Bengali, Chinese, Greek, Gujarati, Hindi, Japanese, Kannada, Malayalam, Marathi, Nepali, Persian, Punjabi, Russian, Sanskrit, Serbian, Tamil, Telugu, Tigrinya, and Urdu. It is a virtual keyboard that allows users to type in their local language text directly in any application without the hassle of copying and pasting. Through this feature we can also learn a lot of languages.

Google Input Tools makes it easy to remember your correction and maintain a custom dictionary for new or unusual words and names. Your message can be found in the language and style you want.  More than 80 languages ​​and input methods can be used. Today we are going to learn google input tools keyboard shortcut.


Read the information provided here quietly. How to download Google input tools keaboard shortcut ? Copy and paste the following shortcut and formulas into your computer. Formula  are given below.


The current input tool can be toggled.


The available shortcut for Gmail and Google Drive are given below.
“CTRL + SHIFT + K” for toggling Google Input tools,
“CTRL + ALT + SHIFT + K” to open the menu.
Keyboard shortcut Gmail and Google Drive given below.
Shortcut CTRL+  SHIFT + K for function Toggle on/off.
Shortcut  CTRL+ALT + SHIFT +K function for Open the input tools menu.
This is Chinese IMES only:
SHIFT
Switch between English and  Chinese mode
SHIFT+ SPACE
Switch between single-byte  characters and double-byte  characters   mode.
CTRL+
switch between single-byte  characters and double-byte characters punctuations mode.
Chrome OS Extension
The following shortcut are useful not only for input tools, but also for all input methods on the operating system.  So the tool for Google input tools keaboard shortcut shown here will be very useful.


ALTR+Shift
Switch to next.
CTRL+SPACE