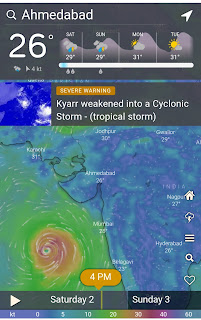 Severe Cyclonic Storm 'MAHA' over East Central Arabian Sea and is expected to track Northwest and then West Northwest till 5th November 2019.
"Mahe is very likely to intensify into a Very Severe Cyclonic Storm over the east-central Arabian sea during the next 24 hours," the IMD stated in its All India Weather Forecast Bulletin.
The weather forecast agency further forecasted that the Depression over the west-central Arabian Sea has also moved west-southwestwards with a speed of 24 kmph during the past six hours. "It is very likely to move southwestwards across the west-central Arabian Sea maintaining the intensity of a Depression during the next 12 hours and weaken into a Well Marked Low-Pressure Area thereafter."
Important Link :