Beranda » School G.R. » Penalty To The School/Teachers Upto 25000Rs/3000Rs For Not Taking Part In Board Work / Paper Checking Without Any Reason

Saturday, October 19, 2019
Bagikan :
Tweet
Penalty To The School/Teachers Upto 25000Rs/3000Rs
For Not Taking Part In Board Work / Paper Checking Without Any Reason.


The Gujarat government today issued rules for the Act regulating the fees charged by private schools in the state through Fee Regulatory Committees.
“The Gujarat Self-Financed Schools (Regulation of Fees) Act, 2017,” came into force this month after Gujarat Governor O P Kohli gave his assent to the said Bill on April 12. 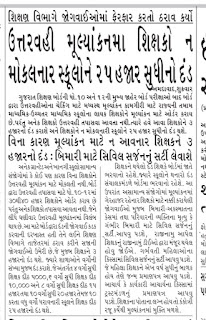 The Bill was introduced by the BJP government in the recently concluded Budget Session with an aim to control the “exorbitant fees” charged by the private schools “in absence of a clear law” regarding it.

As per the rules issued today by the state education minister Bhupendrasinh Chudasama, all the private schools, who want to charge fees more than what has been prescribed in the Act, need to submit their proposal with the Fee Regulatory Committee before imposing any hike.

The Act provides for the establishment of four such committees in four zones, having their headquarters at Ahmedabad, Vadodara, Surat and Rajkot.
The fee structure prescribed in the Act for primary, secondary and higher secondary school is Rs 15,000, Rs 25,000 and Rs 27,000 per year, respectively.

As per the rules, all the schools have to open a special bank account for the purpose of collecting fees from parents. Schools are required to make expenditure using this account only, said the release.

The Act also provides for Fee Revision Committee, to be chaired by a retired judge of the High Court. Schools can approach this committee for revision if they are not happy with the order issued by Fee Regulatory Committees.
As per the Act, orders passed by the Fee Revision Committee shall be final, the release added.