Due To Heavy Rain , Government Of Gujarat Declared Holiday In Schools & Colleges


Because of heavy rain It is necessary for the Government to take pre caution steps for school  & College going students.

Therefore the government of Gujarat declared that the district in which it is raining heavily declared the holiday for the protection of students.

The Saurashtra capital has received 1,361 mm rainfall this month, which is the highest since 1917, according to Rajkot Municipal Corporation records.

Director of India Meteorological Department (IMD) Gujarat Jayanta Sarkar said that state is expected to get widespread rains from Saturday to Tuesday. 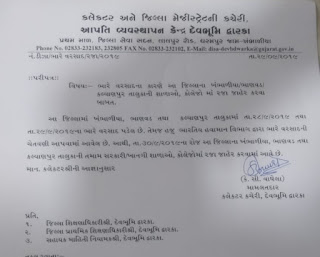 A Disturbance is formed near the state border with northern Pakistan, and its activity is expected to continue until Sunday afternoon. A caution for thunderstorms is needed over Jammu & Kashmir, Punjab, Himachal Pradesh and Uttarakhand.
The aforementioned cyclonic circulation in Uttar Pradesh will move eastward on Sunday while maintaining its power. Hence, 50mm/24hr of accumulated precipitation is expected over several areas of East India until Monday morning.
After that, heavy rains are expected in Northeast India; mainly in Meghalaya due to cyclonic circulation around Bangladesh on Monday and Tuesday.
In the Gangetic Plain, the rainy weather is expected to continue until Monday morning.
On Saturday, heavy rain is likely over Uttar Pradesh, Chhattisgarh, Bihar, Jharkhand, West Bengal, Gujarat and southern Rajasthan. Scattered thunderstorms are possible over Kerala.
Fairly widespread thunderstorms are expected over southern Rajasthan, Gujarat, Madhya Pradesh, southern & eastern Uttar Pradesh, northern Chhattisgarh, Bihar, Jharkhand, northern Odisha, Assam, Meghalaya and Mizoram.