630 crore package to harvest farmers' votes: Decision to indulge farmers before assembly elections, crop loss assistance to 8 lakh farmers in 14 districts As the assembly elections are around the corner in Gujarat, political parties are making innovative advertisements to attract people.

In that, now the state government has Rs. They have tried to reap the farmers' votes by announcing a package of 630 crores. Months have passed since the crops of farmers in many areas have been destroyed due to heavy rains, the monsoon season has also completed, the farmers were tired of asking for help, finally the government has announced an aid package to indulge the farmers.

Before the elections, Chief Minister Bhupendra Patel has announced to attract more than 8 lakh farmers of the state. However, in July, the Agriculture Minister assured that the assistance would be provided. This support package has been announced for the loss of farmers' crops due to heavy rains in the Kharif season of 2022. At that time, it is also believed that the opposition and farmers are saying that this package has been announced to avoid loss of votes.

Farmers of 2554 villages of these 14 districts will get assistance

Chief Minister Bhupendra Patel has announced  this Rs 630.34 crore Matabar aid package after taking a sensitive approach to the comprehensive assessment of these reports and the submissions of farmers, farmers' organizations and public representatives. More than 8 lakh earthlings in an area of ​​approximately 9.12 lakh hectares of land in the state will get the benefit of this package. Agriculture Minister Raghavji Patel gave detailed details of this aid package announced by the state government under the guidance of Chief Minister Bhupendra Patel.

Assistance of Rs.30 thousand per hectare for plantain crop 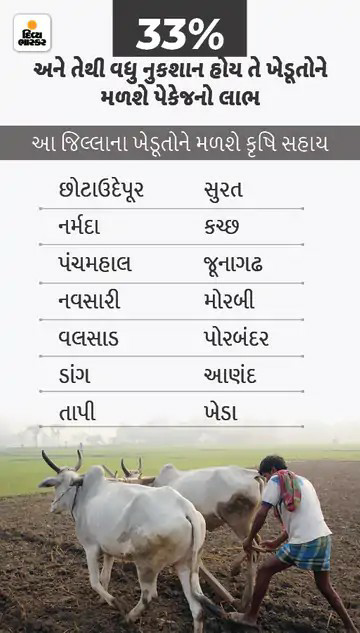 The Agriculture Minister further said that an important decision has also been taken that in cases where the amount of assistance payable as per SDRF norms is less than Rs.4 thousand on the basis of land holding, at least Rs.4 thousand will have to be paid. In such case the amount of assistance payable in addition to the assistance available from SDRF will be paid from the State Budget. In order to get the benefit of this package to the farmers quickly and without delay and complete the process online, the government has created a system to open the Agricultural Relief Package portal on Digital Gujarat medium and for this purpose, the farmers can apply online at the nearest e-gram center along with the necessary documents. Raghavji Patel added.

How To Apply For The Benefit Of The Package

To avail the benefit of the package, the farmers have to fill in the prescribed application form Village Sample No.8-A, Palm Plantation Pattern/Village Sample No. 7-12, copy of bank passbook page showing Aadhaar number, mobile number, bank account number, IFSC code and name, “no-objection agreement” signed by the other holders stating that the benefit is given to one of the joint holders in case of joint account etc. Along with the Taluka Development Officer online application has to be made in the prescribed format. Farmers will not have to pay any fees or expenses for applying, the state government will bear the cost, the agriculture minister also said while giving details of this support package.