GUJARATI FILM COLLECTION IN ONE PDF - USEFUL FOR ALL

GUJARATI FILMS/DRAMAS COLLECTION IN ONE PDF - USEFUL FOR ALL

Here is a pdf with a great collection of  movies for entertainment purposes, which you can watch in your spare time.

Gujarati cinema, informally referred to as Dhollywood or Gollywood, is the Gujarati language film industry. It is one of the major regional and vernacular film industries of the cinema of India, having produced more than one thousand films since its inception.

During the silent film era, many individuals in the industry were Gujaratis. The language-associated industry dates back to 1932, when the first Gujarati talkie, Narsinh Mehta, was released. Until the independence of India in 1947, only twelve Gujarati films were produced. There was a spurt in film production in the 1940s focused on saint, sati or dacoit stories as well as mythology and folktales.

In the 1950s–1960s, the trend continued with the addition of films on literary works. In the 1970s, the Government of Gujarat announced a tax exemption and subsidies which resulted in an increase in the number of films, but the quality declined.

After flourishing through the 1960s–1980s, the industry saw a decline through 2000 when the number of new films dropped below twenty. The Gujarat state government announced a tax exemption again in 2005 which lasted until 2017.

The industry has been partially revived in the 2010s due first to rural demand, and later to an influx of new technology and urban subjects in films. The state government announced a policy of incentives in 2016. 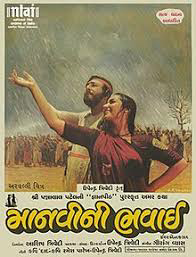 Even before the advent of talkies there were several silent films closely related to the Gujarati people and their culture, and many directors, producers and actors who were Gujarati and Parsi. Between 1913 and 1931 there were twenty leading film company and studios owned by Gujaratis—mostly in Bombay (now Mumbai)—and at least forty-four leading Gujarati directors.