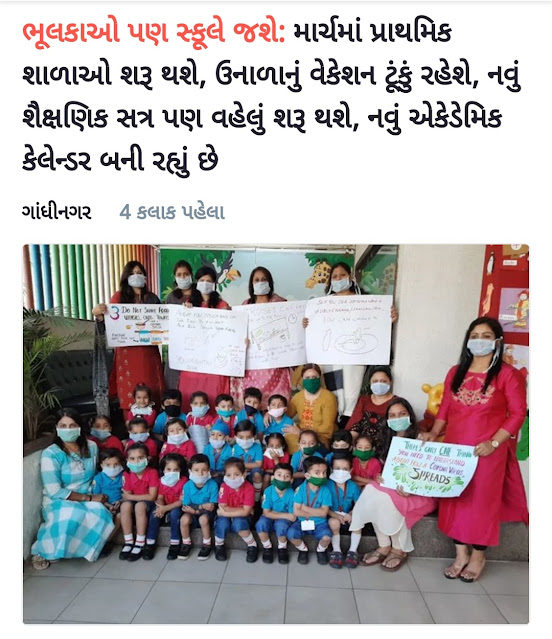 He further said, 'Std. Students of 1st to 8th and 9th as well as 11th standard will be examined and their examinations will be based on the online syllabus taught by the schools. "If the entire syllabus could not be taught online due to the Koro epidemic, the syllabus will be taken on the basis of the number of syllabi taught to the students," Chudasama told our correspondent Times of India.
The most suitable option will be considered. One option is to give the students a question paper at home and have it checked by the teachers. Another option is to have the student called to a very limited number of batch wise schools and take their exams there.

While the third option is online exam. Which is the least likely option as students in rural areas have very limited smartphone and computer facility through which they can take the exam online. There will be a high-level meeting on how to conduct the exams in which each party will have its say. On the basis of which the most acceptable option will be adopted.

Bharat Gajipara, president of the Gujarat Self-Financed School Management Association, said the exams must be taken to make what is taught online meaningful. "If students are given mass promotions, then the credibility of online education will be questioned," he said.

On behalf of the parents of the students, the All Gujarat Board of Guardians demanded that mass promotion be given to the students as the schools were physically closed during the core period. He argued that it would not be appropriate to take the exam as online learning was very limited in rural areas. While the government believes that all options should be considered before making any decision.

School management, on the other hand, has increased pressure on the state government to reopen schools as many parents have refused to pay fees as the schools are not physically open. The school trustees said, "All parents will be encouraged to pay fees if schools start. Corona has caused a lot of damage to schools.

The exam will be based on the syllabus taught online. The government has refused to give mass promotion to primary schools. There have been reports for mass promotion in the media that the state's primary schools have yet to physically begin amid the Corona riots. However, the state government clarified that there were no plans to give mass promotion to students due to the epidemic. State Education Minister Chudasama said that the exams would be conducted before promoting the students to the next academic class.
He further stated that, students from first to eighth and ninth as well as 11th grade will have their examinations and their exams will be based on the online syllabus taught by the schools. Speaking to our correspondent Times of India, Chudasama said, "If the entire course cannot be taught online due to the coro epidemic, it will be based on the number of courses taught to students."
"All options for taking the exam are being considered," he said. The most appropriate option will be considered. An alternative is to give students a question paper at home and have it checked by teachers. Another option is to invite students to a very limited number of batch-wise schools and test them there. While the third option is online examination. This is the least likely option as students in rural areas have very

Director of Primary Teachers orders all districts of the state to start primary schools after high school. Let's start school hours from Tuesday to school hours. The last debt notice has been given to the districts due to the spread of Samata Koro and all the debts of the state have been paid since the month of March of the school. Corona has been instructed by the schools and the education government for the last 6 months to give enough time to the children due to the morning schools and rotation of all the teachers to be present every day. This could not be done, the education of the children has deteriorated continuously due to lockdown. Now that the orders have been closed, due to the situation, with the issuance of the primary circular, teachers will have time for street classes in the afternoon and teachers will be allowed to start school before Diwali.

There will be more time for education. However, it was decided to bring the children on vacation so that it would be like chewing iron for the teachers to bring the children back on track. However, it was Diwali and it is too tight for the children. Teachers are also gearing up. Classes for teachers of Std. 6 to 8 are likely to start by the end of February. Teachers are now more likely to decide to open schools in the afternoon instead of in the morning. At the same time, all the teachers have been instructed to be present at the school and to start colleges. At the same time, the classes of Std. 6 to 8 are starting by the end of February.
On the other hand, the primary schools, i.e. 60 per cent, are urging to be present and are also expressing the possibility of going to school. No decision on starting has been made so far by the present staff accreditation by the present Accreditation Street Education unit test assessment and not although now Corona's position had come.
IMPORTANT NEWS:
Read Detailed News in Gujarati : Click Here
Tag : News Report, News Report (School)