Beranda » IPL 2020 » Do-or-Die Battle for Punjab, Kolkata and Rajasthan in Super Sunday Today in IPL | Race between 6 teams for the remaining 3 places in the playoffs

Do-or-Die Battle for Punjab, Kolkata and Rajasthan in Super Sunday Today in IPL | Race between 6 teams for the remaining 3 places in the playoffs

Race between 6 teams for the remaining 3 places in the playoffs,

Read which team can qualify ? 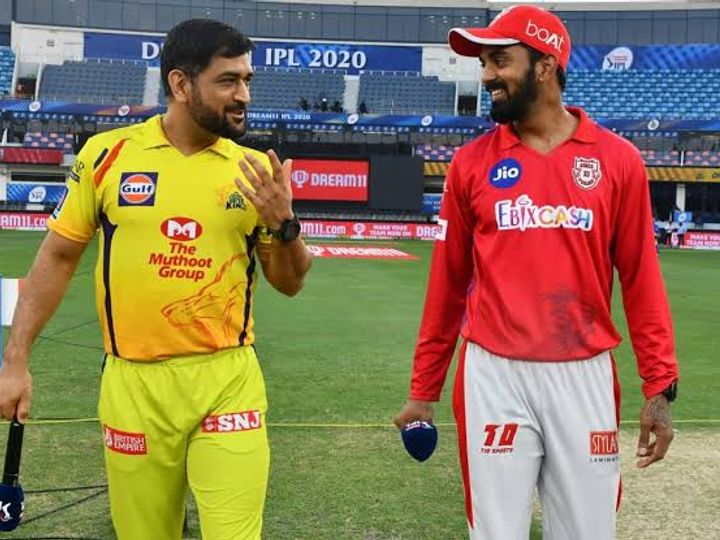 Only the Mumbai Indians have qualified; Bangalore, Delhi, Hyderabad, Punjab, Rajasthan and Kolkata may still qualify

The winner of the Delhi-Bangalore match will finish in the top-2, the losing team will have a chance to reach the final-4 in a 'if and then' situation.

This time 2 teams will qualify for the playoffs with 14 points, the first time this has happened in 2010.

Punjab, Kolkata and Rajasthan will be out if they lose, no guarantee of a place in the playoffs if they win

52 of the 56 matches of the IPL 2020 league round have been played. However, only one of the four teams - Mumbai Indians - has qualified for the playoffs. The race is still on between the 6 teams for the other 3 places. The Chennai team is out and today they can also take out Punjab.

Let’s talk about how each team can qualify one by one. 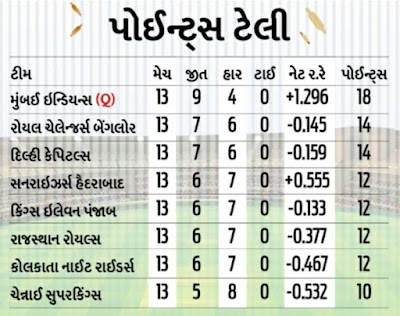 Delhi Capitals: Delhi, who have lost four matches in a row, now need to win their final match against Royal Challengers Bangalore to advance on their own in the tournament. Delhi have 14 points from 13 matches. If they win against Bangalore, they will finish second in the league round with 16 points. That means he will have two chances to reach the final like Mumbai.

What if he loses against Bangalore?

Royal Challengers Bangalore: Like Delhi Capitals, the fate of Bangalore is in their hands. If they win their final match against Delhi, they will finish in the top-2 and face Mumbai Indians in qualifier-1.

What if they lose this match?

After losing the match against Delhi, Bangalore will qualify in 2 of the following 3 events:

Sunrisers Hyderabad: Out of the 4 teams currently at 12-12 points, the best net run rate is from Sunrisers Hyderabad. Their net run rate is +0555 after beating Delhi Capitals and Royal Challengers Bangalore in two consecutive matches. Equation is simple for them.
Kings XI Punjab: Dhoni's daddy's army could spoil Punjab's performance by winning five matches in a row. Punjab have 12 points from 13 matches and if they lose to Chennai today, they will be eliminated from the tournament. But winning the match does not guarantee them a place in the 100% playoffs. Why Let's understand.
Rajasthan Royals: Rajasthan Royals will qualify today if they win against Kolkata Knight Riders and Punjab against Chennai, while Hyderabad lose their final match against Mumbai. Rajasthan also have 12 points, but winning the match against Kolkata is not enough for them. Because- Bangalore, Delhi, Punjab and Hyderabad all have much better net run rate than them.
Kolkata Knight Riders: Knight Riders' net run rate (-0.467) is even worse than Rajasthan Royals (0.-377). Thus winning the final match against Rajasthan is not enough for them either. They also have to pray that Chennai wins against Punjab and Mumbai wins against Hyderabad.
Note: Since the Kolkata / Rajasthan match is after Chennai / Punjab, both the teams will have an idea of ​​how many runs the team will have to win the match to beat Punjab. Or how unrealistic it is to win by a margin.
Important Link:-
Click Here To Read In Gujarati
Tag : IPL 2020

0 Komentar untuk "Do-or-Die Battle for Punjab, Kolkata and Rajasthan in Super Sunday Today in IPL | Race between 6 teams for the remaining 3 places in the playoffs"