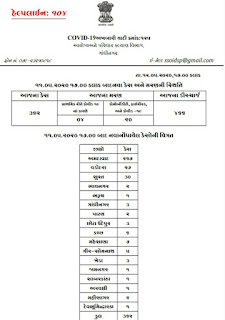 267 new cases were registered in Ahmedabad.There were a total of 8904 cases in the state

Today 466 patients recovered in the state

With this, 466 patients have been discharged today. Thus far, a total of 3246 people have been affected by corona and have returned home.

In Gujarat, the rate of recovery among positive patients admitted to hospital for discharge is increasing more than the number of cases of coronavirus infection. Stating that the condition of Covid-12 in Gujarat including Ahmedabad is completely under control, Health Front Secretary Dr. Janyati Ravi said that in the last 4 hours on Tuesday evening, a total of 6 positive test reports were received in Ahmedabad, 4 in Vadodara and 20 in Surat.

However, the highest number of discharges of 6 patients in a single day so far has reached 4 in Gujarat. Between these two parameters, 21 civilians were found dead in Ahmedabad, one each in Rajkot-Surat-Vadodara in 8 hours, according to the medical bulletin.

The Coronao epidemic has so far claimed the lives of 9 people in Gujarat, including 21 from Ahmedabad. More than 3 of the positive patients who were infected already had co-morbidities. Leading health secretary Dr Janyati Ravi said on Tuesday that six of the seven deaths were due to Covid-12 alone. "People in the state are now reporting on time and the situation is improving," he said.

Ahmedabad, a hotspot with more than 90 per cent cases in Gujarat, has been discharged on Tuesday and the number of those who reached home after recovering from discharge has risen to 12. While 203 patients are undergoing treatment in the hospital. In three out of six districts, not a single active case has been reported in the last five days