So far 48,553 people have recovered, the number of infected in Maharashtra has crossed 41 thousand

Infection of 9 CRPF jawans in Delhi, death of a sub-inspector

The number of Corona infections has reached 1,18,452, with 3,600 people dying from the corona and 48,553 people recovering from treatment across the country.

Maharashtra has the highest number of 41,642 patients in the country with 1,454 deaths due to corona. Tamil Nadu ranks second with 13,967 infected.

In addition there are 217 more patients, who could not be traced to which state. These figures are based on information from covid19india.org and the state government.

According to the Union Ministry of Health, there are 1 lakh 18 thousand 447 infected people in the country. Out of which 66 thousand 330 are undergoing treatment, 45 thousand 299 have recovered and 3583 people have died.

80 per cent deaths due to corona in Maharashtra, Gujarat, Madhya Pradesh, Bengal and Delhi: Ministry of Health

The head of IMCR, Dr. Raman R Gangakhedkar said that more than one lakh tests have been done on the fourth day today. In addition, 27,55,174 tests have been conducted till one o'clock today. Of these, 1887 tests were performed in a private laboratory. 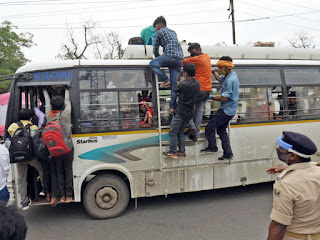 There were 246 new cases here on Thursday. There were 59 positive in Indore, 61 in Ujjain, 27 in Bhopal, 22 in Khandwa, 14 in Morena and 13 in Burhanpur. The transition has spread to 49 out of 52 districts here. In most of the districts, most of the tourists from outside are positive. The number of infected people in the state is estimated to reach 80 thousand to one lakh by July.

2345 new infections were found here on Thursday. With 1382 new cases in Mumbai, there are now a total of 25 thousand 317 patients. In the last 24 hours, 64 people have died in the state. So far, more than 4 lakh people have been quarantined here.
Uttar Pradesh Infected: 5515- The highest number of 340 infected people was found here in the last 24 hours. The state has also recovered 3204 people so far, while 138 people died. UP has become the seventh state with more than five thousand patients.

212 infected were found in the state on Thursday. Out of which 33 patients were found in Dungarpur, 22 in Jalaur, 13 in Udaipur, 10 in Jaipur, 08 in Nagaur, 7-7 in Sirohi and Rajsamand. In CPRF, 9 jawans were found infected and one sub-inspector died. Out of the total infected people, 5898 are undergoing treatment here.

Here on Thursday, 571 patients reported positive corona while 375 recovered. In CPRF, 9 jawans were found infected and one sub-inspector died. Out of the total infected, 5898 are undergoing treatment here

View Also This : - Corona Live Updates For The Whole World/India/Gujarat